A message from our Chief Executive – our future plans 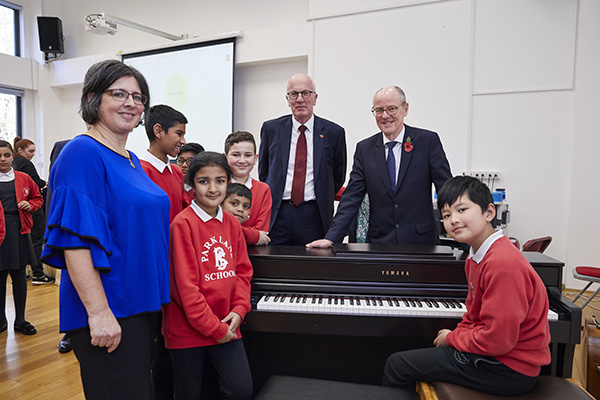 A primary school at the forefront of musical education has been recognised with a visit by Schools Standards Minister Nick Gibb and representatives from ABRSM.
Nick Gibb MP, Minister for School Standards, visited Park Lane Primary in Wembley, London, on Wednesday 31 October to present the school with its new Yamaha Clavinova digital piano to use in music lessons after it beat 41 other UK primary schools to win the Classical 100 competition.
The ABRSM Classical 100 is a free online resource that can be used by primary school teachers with or without prior musical knowledge. It's ideal for introducing pupils to the joy of classical music, where pupils can improve their aural skills in identifying a range of orchestral instruments along with interpreting the emotions of the music while developing concentration in listening skills.
Over 5,000 schools, 7,500 teachers and an estimated 180,000 pupils have engaged with the ABRSM Classical 100 online learning resource since it first launched in 2015. 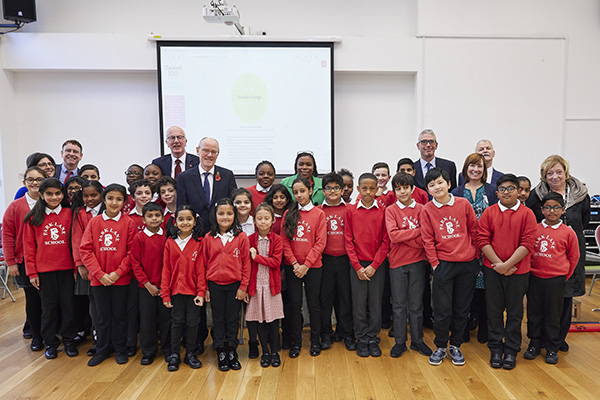 Minister for School Standards, Nick Gibb MP, said: “I want to congratulate the children and staff at Park Lane Primary school, whose inspired musical creativity has been rightly rewarded with this generous Classical 100 award.
“Music is so important for young people – learning to play an instrument can open up countless opportunities, while the enjoyment of music can stay with people their whole lives. As the Arts Council’s report showed last week, almost nine in 10 schools are now benefiting from our music hubs, following £300 million of government investment, and I look forward to seeing the impact of those hubs continuing to spread.”
ABRSM Chief Executive Mick Elliott said: “The visit by Minister Nick Gibb MP to Park Lane Primary School celebrates Classical 100's success.
“Classical 100 is about igniting enthusiasm for, and keeping children engaged in, music. This is really important for all of us and is part of ABRSM’s commitment to support and inspire achievement in music.”
In May 2018, ABRSM set a challenge for all UK primary schools to submit an original idea for a musical activity to support Carl Orff’s ‘O Fortuna’ from Carmina Burana.
The winning entry was to receive a Yamaha Clavinova CLP-635R digital piano and listed as the 100th challenge in the collection, which is available to all primary schools in the UK to use as part of lesson plans. 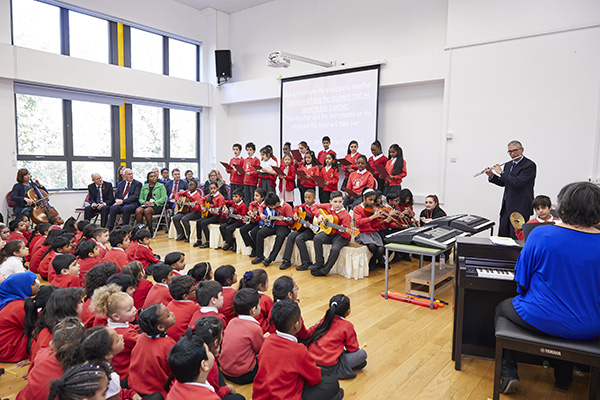 The Yamaha Clavinova piano was presented to Park Lane Primary School during a special assembly where the school’s music teacher, Cecilia Kovacs, and 360 pupils conducted their winning challenge.
Cecilia Kovacs spoke about her experience of working with the Classical 100 programme and why she believes letting children take charge leads to creativity: “Having worked at Park Lane Primary School for over two years, music has become an important part of the curriculum. The children have weekly music lessons in which they study a comprehensive singing based curriculum.
“I discovered the Classical 100 programme via the ABRSM mailing list. A free online resource for primary schools in the UK, it houses 100 great pieces of classical music which teachers can draw upon in lessons, school assemblies and other school activities.
“Since signing up for the programme, I’ve found it to be a wonderful resource which has allowed me to introduce and immerse the children into the best pieces of classical music.
“I never expected to win the ABRSM Classical 100 competition, rather I really enjoyed planning the lesson and delivering the material. But to win the digital piano from ABRSM and its partners is an absolute treasure and will be a significant influence in future lesson plans.”
A spokesman for Yamaha UK, a partner of the Classical 100 initiative alongside Classic FM and Decca Records, said: “Yamaha is delighted to partner with ABRSM on the Classical 100 competition. Good-quality music education has proven benefits to students throughout their academic life and Yamaha Clavinova has been at the forefront of accessible classroom teaching for 35 years.
“In our anniversary year, we are pleased that Park Lane Primary will be able to benefit from this fabulous initiative, and we hope they may produce musical stars of the future!”